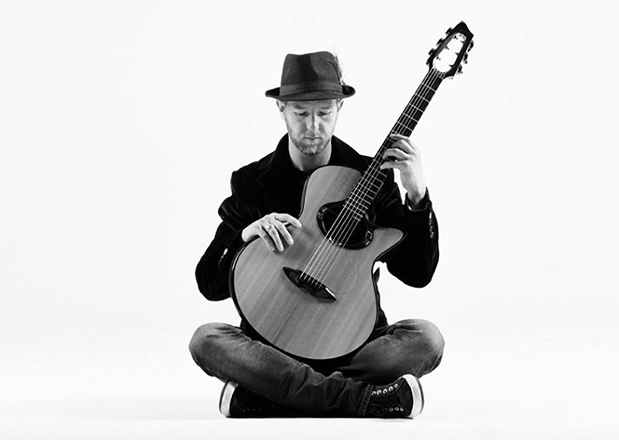 I built my first guitar at 18. It was a highly eccentric electric guitar which I designed and was guided in making by instrument builder Urs Hauptle. After a year spent studying fashion design, I played that guitar to its demise in bands, tours and albums which took me around the country over the following ten years. During this time I also studied and worked as a jewellery designer and silversmith. Skills which came in useful when my best friend Matthias Roux offered me the opportunity to build my own acoustic guitar as part of a course he was running out of the Maingard workshop. I jumped at the chance and the results of that build were a position at Maingard Guitars as an apprentice luthier and inlay artist for the following three years where I participated in all aspects of over 65 builds and was responsible for most of the inlay art there. The skills I acquired as a jeweler translated well into inlay and continue to inform my work at Casimi Guitars today.

The guitar I designed and built on the course, went on to become the prototype Casimi C2S. Realising that we had created something special and unique, Matthias and I decided we would have to open our own workshop in order to pursue the direction we felt called to go.
In January 2012 we officially opened our workshop have been gaining momentum ever since.